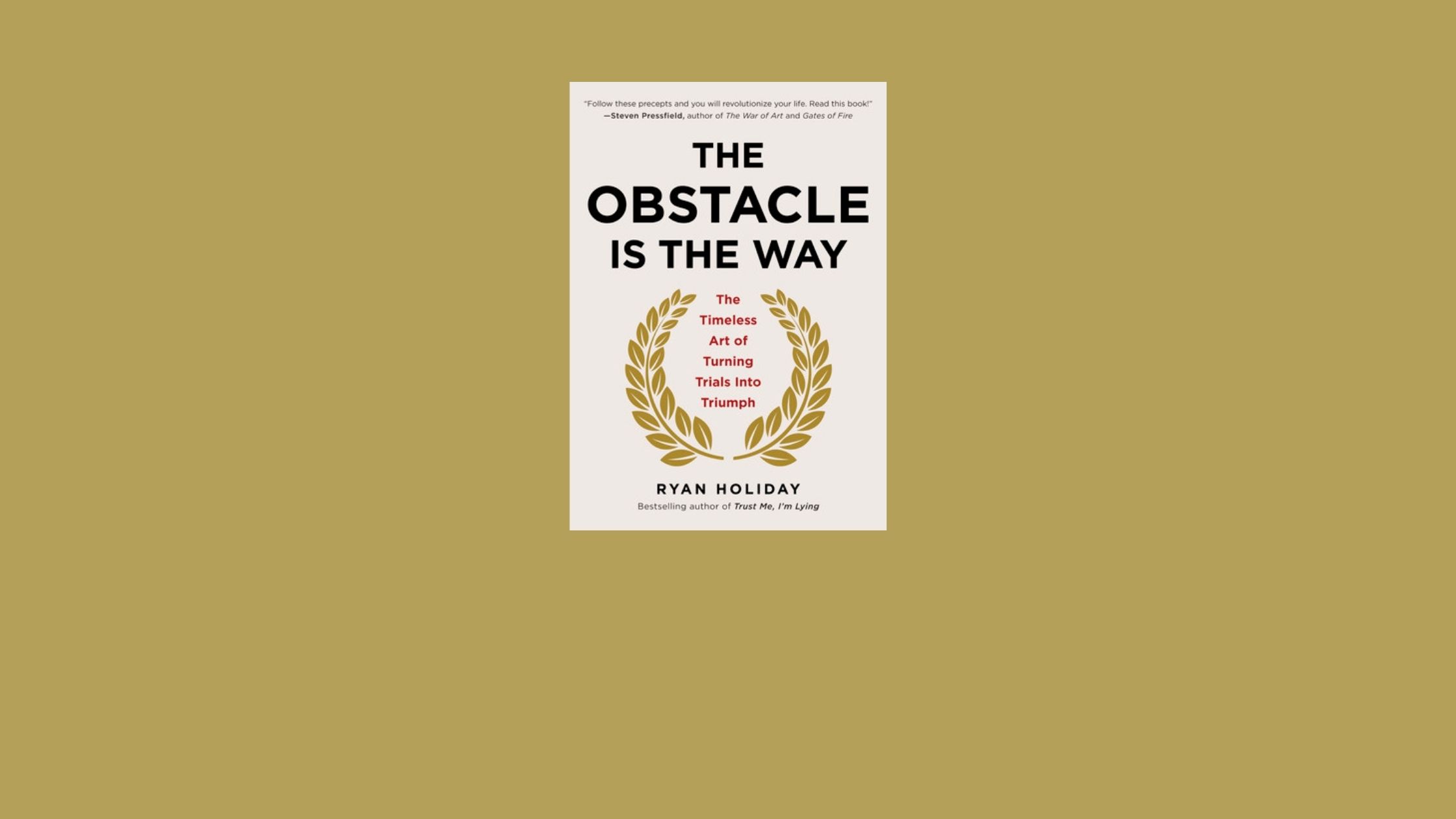 The Obstacle Is the Way

Posted In
Behavior
A

As with change, so too must we embrace the obstacles of our lives. They are constant and challenge us to evolve in our thinking and ways. A life without impediment is a life without the impetus to improve. Adversity builds character, strength and great appreciation for the hard-earned reward.

Our actions may be impeded... but there can be no impeding our intentions or dispositions. Because we can accommodate and adapt. The mind adapts and converts to its own purposes the obstacle to our acting. The impediment to action advances action. What stands in the way becomes the way.
— Marcus Aurelius

Ryan Holiday opens "The Obstacle Is the Way" with that quote from one of the most revered Stoic philosophers. Nestled within it is a deep, life-altering truth. The obstacle is indeed the way, for through it you become something more. You act. You learn. You grow. You adapt. You endure. You simply need the objectivity and courage to do so.

How skilled we are at cataloging what holds us back!
— Ryan Holiday (p.1)

We humans are prone to a negativity bias, primarily from our ancient origins and instincts born of an all-consuming need to survive in a harsh and unforgiving world. Holiday's valuable contribution in this book is his framing of Stoic philosophy as three key, ordered disciplines. He builds on this framework with practical strategies for turning obstacles to your advantage. Illuminating stories from a wide variety of fascinating, historical figures add amazing color and depth.

Action is the discipline of attacking an obstacle using strategies that give you the greatest possibility of success. It is also the discipline of outworking your competitors and executing even the most humble of tasks to the best of your ability without vanity.

Will is the discipline of being bold not brash, courageous not weak, humble not arrogant and resilient not rigid. It comes from the deepest part of us in our deepest hour of need. It is stuff born of the soul. Actions can be thwarted, but the will of mankind can carve straight through mountains.

Perceive objectively, act decisively and persevere with humble regard.

1. Persistence In the Face of Obstacles

[Of inventing], the first step is an intuition — and comes with a burst — then difficulties arise.
— Thomas Edison (p.80)

We often see the result of an invention but not the tremendous effort required to produce it. Persistence in facing obstacles means exhausting every strategy, from the obvious to the creative and finally chiseling away with dogged determination if necessary. Edison tried thousands of filaments for the incandescent bulb until a piece of bamboo finally did the trick. (p.78) Overcoming the obstacles of invention, and life in general, is rarely pretty. History shows time and time again that persistence really does pay.

2. Courage In Walking the Path Untrodden

Whoever cannot seek the unforeseen sees nothing, for the known way is an impasse.
— Heraclitus (p.103)

The path untrodden is filled with obstacles waiting to be cleared. The rewards are great, but expect to earn that reward. A new path has no clear destination. The difficulties you face, the decisions you make and the lessons you learn will guide the way.

Failure shows us what not to do, what path not to take and what does not resonate with others. Listen to what it teaches and turn it to your advantage.

Failure often precedes success. Embrace it as a necessary component of improvement. Be like the entrepreneur who is open minded, a calculated risk taker, unabashed in defeat, quick to rise after a fall and eager to learn from frequent, small failures.

4. The Value of A Job Well Done

Oh, how blessed young men are who have to struggle for a foundation and beginning in life. I shall never cease to be grateful for the three and half years of apprenticeship and the difficulties to be overcome, all along the way.
— John D. Rockefeller (p.15)

Countless examples exist of people who refused to be defined by circumstance. Extreme poverty, imprisonment, disabilities and other significant impediments only served to deepen their determination to act and overcome.

Are you envious of others who seemingly coast in life while raking in money and accolades? Focus on your own aspirations and outwork all of them. Conditions will never be perfect for getting started, nor will the fruits of your effort be perfect. Just get moving and start iterating. Momentum will build and propel you forward.

Remember there is value in even the humblest of endeavors. Whether being "introduced to the broom"  or making life altering decisions in the board room, do it well with not a trace of vanity.

A good process builds success via good fundamentals and small steps toward objectives. The fundamentals encapsulate the value of performing even the smallest skill to the best of your ability while small steps avoid the fear and uncertainty of big objectives entirely.

Treat big goals as a North Star. Let them guide you but always focus your efforts on the next step — one foot in front of the other while occasionally looking up to ensure you have not lost your way.

Perfection is an elusive goal, seemingly within reach yet unattainable. Progress is its own reward.

When a man knows he is to be hanged in a fortnight, it concentrates his mind wonderfully.
— Samuel Johnson (p.167)

Victor Frankl, a survivor of Nazi death camps, developed a theory known as logotherapy, a conviction that humans are driven by what they find meaningful as opposed to simple pleasures. What is meaningful is largely an individual pursuit in life, for meaning is not a simple number or a universal truth. It is what resonates with you and within you.

A catalyst for finding life's meaning lies in memento mori (remember you must die). Death is a permanent impediment, looming large on the horizon. Let it clarify what is most important, then proceed without delay.

When the fire is strong, it soon appropriates to itself the matter which is heaped on it, and consumes it, and rises higher by means of this very material.
— Marcus Aurelius (p.176)

Nature is indifferent to your struggle. Let that be your first lesson in building strength from within. True strength and forbearance are forged in the shadow of life's experiences. Each obstacle makes you better, stronger and more confident. This is why the objective mind welcomes and even embraces each obstacle.

Vires acquirit eundo. We gather strength as we go. (p.179)

8. Accepting What Cannot Be Changed

My formula for greatness in a human being is amor fati: that one wants nothing to be different, not forward, not backward, not in all eternity. Not merely bear what is necessary, still less conceal it . . . but love it.
‍— Nietzsche (p.150)

Some obstacles will defeat you. Accept all things in life with grace and humility, including those impediments you cannot move. For even in those most difficult of moments, wisdom is gained for the journey ahead.

As Laura Ingalls Wilder said, "there is good in everything, if only we look for it." (p.55)

Offer a guarantee and disaster threatens.
— The Oracle of Delphi (p.139)

The Stoics practiced premeditatio malorum or the premeditation of evils to prepare in advance for alternate outcomes, because the expectation of a perfect outcome was pure hubris. Always reduce the influence of external factors in your endeavors and be wise to those that remain. Anticipate and rehearse alternate outcomes, not all of which are positive, to avoid both surprise and disappointment.

10. Strategies for Turning Obstacles to Your Advantage

We are A-to-Z thinkers, fretting about A, obsessing over Z, yet forgetting all about B through Y.
— Ryan Holiday (p.91)

Holiday provides a wealth of strategies for facing obstacles and turning them to your advantage. I collected over twenty of them, but far be it from me to just hand them over, fellow life adventurer! Discover them on your own short journey through this field manual for life and gain understanding by describing them in your own words. Then proceed to direct application in your own life.

As it turns out, this is one thing all great men and women of history have in common. Every impediment only served to make the inferno within them burn with greater ferocity.
— Ryan Holiday (p.3)

One of the great features of this book is Holiday's use of historical figures and the obstacles they overcame as inspiration for our own lives. I want to end by quickly summarizing my favorites.

You can find out more about this book and Holiday's other works at his web site. You can get this book or read reviews at the following sites:
Amazon | Apple Books | Barnes & Noble | Goodreads | Google Play | IndieBound