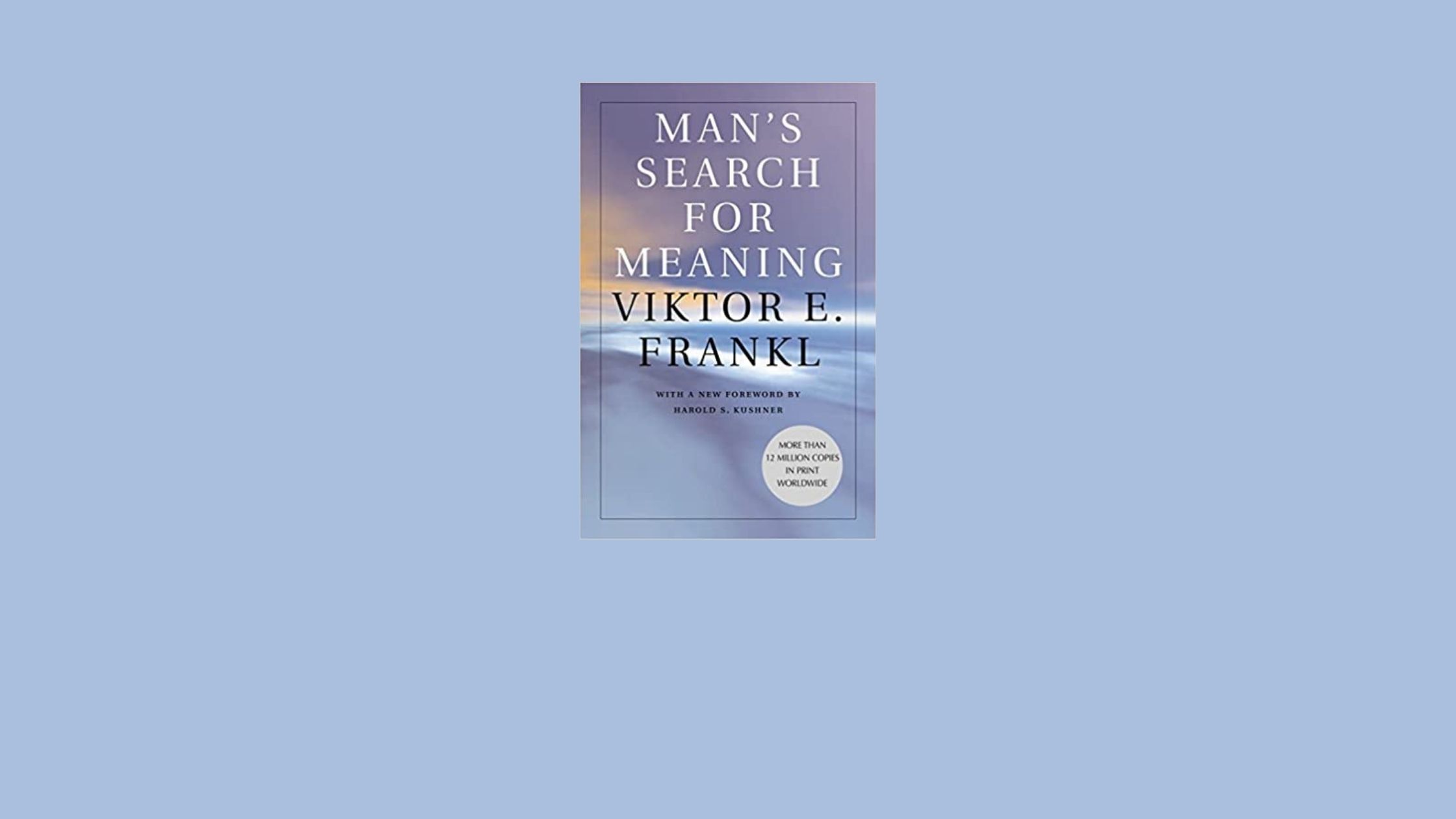 Frankl, creator of Logotherapy, survived Nazi concentration camps and provides a compelling argument that life is a quest for meaning, not power or pleasure. He also argues that meaning is unique to each of us. This book will change you if you have the courage to read it.

Life in a concentration camp tore open the human soul and exposed its depths. Is it surprising that in those depths we again found only human qualities which in their very nature were a mixture of good and evil?
— Viktor Frankl (p. 87)

Starting in 1942, Frankl endured a total of three long years at four Nazi concentration camps: Theresienstadt, Auschwitz-Birkenau, Kaufering, and Türkheim. Prisoners at these camps were initially stripped of everything material. Then they were brutalized to such an extent that they lost their humanity.

The odds of surviving one of these prison camps was no more than one in twenty-eight (or roughly 3.5%). Many prisoners were sent immediately to their deaths in gas chambers or crematoriums right off the train. Those who survived experienced a famine of the body and soul even as they were forced into back-breaking labor under brutal conditions. Survival became the sole focus and every decision you, a Capo (prisoner with special privileges) or a camp guard made could mean your death.

A man who for years had thought he had reached the absolute limit of all possible suffering now found that suffering has no limits, and that he could suffer still more, and still more intensely.
— Viktor Frankl (p.91)

Frankl describes a prisoner's journey as one consisting of three stages.

It is in this setting that Frankl understood the true nature of suffering and that suffering itself could have meaning through his response to it. It is a difficult, heart-rending read but a necessary one for truly appreciating his wisdom.

2. Life Is A Quest for Meaning

Life is not primarily a quest for pleasure, as Freud believed, or a quest for power, as Alfred Adler taught, but a quest for meaning. The greatest task for any person is to find meaning in his or her life. Frankl saw three possible sources for meaning: in work (doing something significant), in love (caring for another person), and in courage during difficult times. Suffering in and of itself is meaningless; we give our suffering meaning by the way in which we respond to it.
‍— Harold S. Kushner (foreword)

Given his experiences, Frankl makes a powerful argument for life as a quest for meaning. Meaning itself can be found in the significance of your work, in the love you have for another and in your response to suffering.

Work in this case is something aspirational:

A man who becomes conscious of the responsibility he bears toward a human being who affectionately waits for him, or to an unfinished work, will never be able to throw away his life.
— Viktor Frankl (p.80)

Being in love is loving another person or receiving the love of another. Thoughts of this person and your future together give life special meaning. Thinking of this loved one also provides refuge from imprisonment and the low points in life.

When a man finds that it is his destiny to suffer, he will have to accept his suffering as his task; his single and unique task. He will have to acknowledge the fact that even in suffering he is unique and alone in the universe. No one can relieve him of his suffering or suffer in his place. His unique opportunity lies in the way in which he bears his burden.
‍— Viktor Frankl (p.77)

One can also find meaning in suffering. This one is a bit difficult to understand, but the concentration camp stories help enlighten. When dealing with a terminal illness, imprisonment and other circumstances that cause unavoidable suffering, meaning can be found in how you bear that suffering. You can choose to succumb or to bravely, proudly face it and make a monument to human achievement.

Don’t aim at success — the more you aim at it and make it a target, the more you are going to miss it. For success, like happiness, cannot be pursued; it must ensue, and it only does so as the unintended side-effect of one’s dedication to a cause greater than oneself or as the by-product of one’s surrender to a person other than oneself.
— Viktor Frankl (preface)

The meaning of life is a personal pursuit of that which cannot be repeated and for whom cannot be replaced. Although you can certainly benefit from the hard-won wisdom of others, your journey will be unique. There will never be another person like you or a journey quite like yours. Revel in this fact!

A personal meaning in life is the most effective motivation for survival in the best and worst of times. There is a healthy tension between what one is and what one aspires to be. That tension pulls you forward. With each step you gain momentum and solidify both purpose and resolve.

There is comfort in the struggle for something worthwhile. What you do becomes less like work and more like a natural flow state, one that becomes increasingly effortless and bountiful in the joy it provides.

The neurotic who learns to laugh at himself may be on the way to self-management, perhaps to cure.
— Gordon W. Allport (p.125)

Logotherapy is derived from the Greek word "logos," which stands for "meaning." It rests firmly upon the quest for one's meaning in life as the primary motivator. Two things stand out:

Human beings live by finding value in the future. Without it, we lose interest in living and deteriorate toward a swift end. Nietzsche's wisdom of "he who has a why to live for can bear with almost any how" is the foundation of Logotherapy and a potent recipe for recovery.

Life is like being at the dentist. You always think that the worst is still to come, and yet it is over already.
— Bismarck (p.72)

The term "anticipatory anxiety" is used in Logotherapy to describe the fear of what is to come. Fear tends to presage what is feared. Making light of fear is an effective technique in reducing or even eliminating the effects of fear.

The term "hyper-intention" is an obsessive focus on making what one wishes to happen practically impossible due to the built up tension.

The term "paradoxical intention" is a Logotherapy technique that uses hyper-intention focused on the opposite of what one fears (called "dereflection"). For example, if you can't fall asleep, focus intently on staying awake as long as you can.

Logotherapy is a fascinating approach to human psychology and mental healing, including serious conditions that involve suicidal intentions. Renewing one's meaning in life gets right to the heart of many issues and promotes a deep-rooted, spiritual healing. It is a topic I am knew to but excited to study further!

People tend to see only the stubble fields of transitoriness but overlook and forget the full granaries of the past into which they have brought the harvest of their lives: the deeds done, the loves loved, and last but not least, the sufferings they have gone through with courage and dignity.
— Viktor Frankl (p.150)

According to Frankl, tragic optimism means that we remain optimistic even in the face of pain, guilt and death. There is an element of Stoicism here in that external forces will sometimes direct your life in meaningful ways. Your freedom lies in how you react to those forces. There is also the basic tenet of living life to its fullest and reveling in every small moment.

Once you find meaning in life, happiness ensues. In some ways, even suffering is bearable now that you have something to live for. Recognize that suffering is a necessary component of life, because it highlights the true worth of happiness. Everyone suffers difficult times. In those times, remember your meaning. Focus on it intently.

Regarding guilt, the history of your life to date is already written and cannot be undone. Each footprint in time has made you who you are today. Do not perceive the past as lost with regret. Treasure it even as you decide who you are to become.

Again I quoted a poet — to avoid sounding like a preacher myself — who had written, "What you have experienced, no power on earth can take from you." Not only our experiences, but all we have done, whatever great thoughts we may have had, and all we have suffered, all this is not lost, though it is past; we have brought it into being. Having been is also a kind of being, and perhaps the surest kind.
‍— Viktor Frankl (p.82)

Death stalks us, one and all. Live every moment to the fullest, because it may very well be your last. Part of what makes our lives so special is that they last for such a short time. It is easy to get lost in the weeds and to forget just how special every moment is. Savor it all.

In the end, you are not merely useful. You — and every moment of your unique life — are of great value. You must realize this to find your meaning and to fulfill your purpose.

You can get the book "Man's Search for Meaning" or read reviews at the following sites:
‍Amazon | Apple Books | Barnes & Noble | Goodreads | Google Play | IndieBound