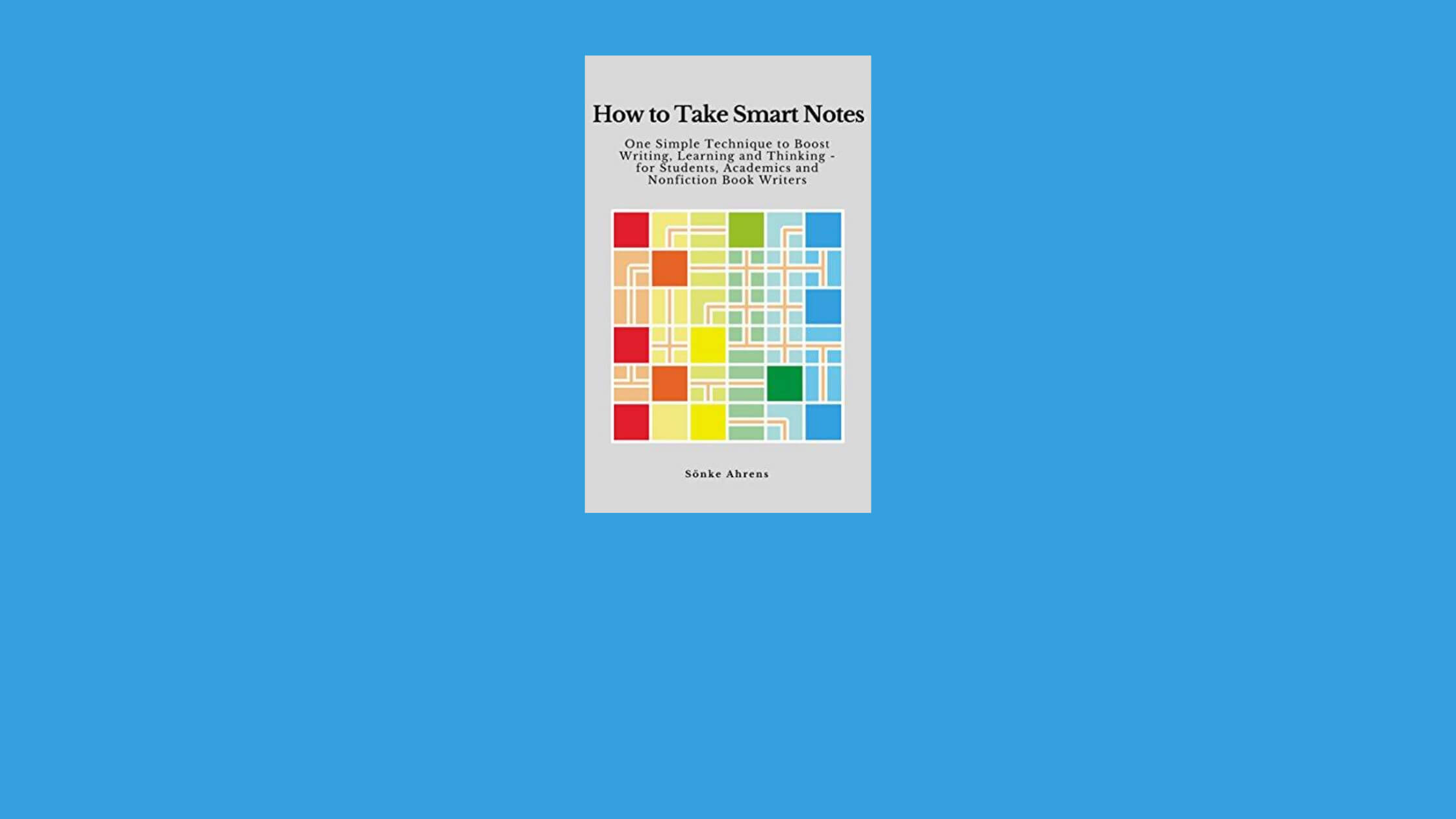 How to Take Smart Notes

Smart Notes is a fun read, packed with an amazing amount of useful information that is not limited to effective note-taking. You will find forays into what distinguishes creative people, how to avoid staring at a blank page, how to avoid distractions in your work, how to keep an open mind, how to avoid the need for willpower, how memory works in the brain and much more!

My top 5 takeaways from Smart Notes:

1: Writing as the Medium of Understanding

This one principle is the key takeaway from the book. It was a lightning bolt right between my eyes that literally transformed the way I read, write and acquire knowledge overnight. The idea is so simple in retrospect. Instead of just highlighting passages in books and articles, write notes in your own words. Doing so confronts you mercilessly with your own understanding or lack thereof.

Every intellectual endeavor starts with a note.
ー Sönke Ahrens (p.5)

Ahrens turns conventional wisdom on its head by suggesting that note-taking, and not the selection of a topic, is the beginning of every intellectual endeavor. This may seem a bit odd at first given that most people are not taught to think and learn this way; however, when you consider the recent popularity of small habits, the incremental change of kaizen and other methods of breaking big problems down into more approachable bits, learning this way makes great sense.

Ahrens introduces us to Niklas Luhmann and his Zettelkasten, translated as "slip-box," system of note-taking. Luhmann published almost 60 books and hundreds of scholarly articles in only thirty years. Even more astonishing, a dozen more books were published posthumously in his name. Luhmann himself attributed his prolific output to the slip-box system he developed.

I always have a slip of paper at hand, on which I note down the ideas of certain pages. On the backside I write down the bibliographic details. After finishing the book I go through my notes and think how these notes might be relevant for already written notes in the slip-box. It means that I always read with an eye towards possible connections in the slip-box.
ー Niklas Luhmann (p.65)

The slip-box itself is simply a collection of paper slips or cards, each of which contain one idea written in your own words. Cards are linked together to connect thoughts. Luhmann used physical boxes, slips of paper and a numbering system that enabled him to create a hierarchy of related notes. As Ahrens demonstrates, you will find methods similar in principle used by Benjamin Franklin, Charles Darwin, Richard Feynman and others. As is typically the case, the idea is not new. The system is what distinguishes itself.

Although Luhmann employed wooden boxes and slips of paper in his day, Ahrens explains how digital tools make the slip-box method even simpler in practice today. A new class of tools, like Roam and Obsidian, are gaining in popularity and momentum. I personally use Obsidian ー more on that in future articles.

The method may be simple, but it will challenge you to change the way you read, to write notes in your own words, to confront flaws in your own thinking and to grow intellectually.

I am a perfectionist when it comes to organizing things. I organized my digital information in directories or categories for quite a while before adopting the idea of tags. I began to favor tags because they allowed for a multidimensional approach to organization.

Ahrens opened my eyes to another simple idea from Luhmann: to use tags or keywords for retrieval instead of archival. So instead of tagging something with the keyword "writing," I might tag it with "writing to understand." Since I am always looking in my slip-box for connections to a new idea rolling around in my head, organizing notes according to a line of inquiry makes for quick retrieval as I peruse existing notes.

Taking the idea further, Luhmann had an index of key phrases, each of which would each link to one or two notes. Those notes served as doorways to clusters of related notes that allowed him to quickly enter his slip-box for a specific topic or line of inquiry. He would then follow internal links as necessary.

The topics you link to from your own index are subject to change as your understanding deepens. Topics or lines of inquiry are not set in stone and evolve with the introduction of new, related notes.

4: Be Open Minded but Selective

The principle is that you must not fool yourself, and you are the easiest person to fool.
ー Richard Feynman (p.73)

How to be truly open minded is a bit of an open question. Starting with an understanding of how confirmation bias affects you is a good start, so that you may always be on guard. It is natural for you to seek out support for what you believe and to discard those things that challenge your current world-view. You must do exactly the opposite to learn and grow.

I had... during many years followed a golden rule, namely, that whenever a published fact, a new observation or thought came across me, which was opposed to my general results, to make a memorandum of it without fail and at once; for I had found by experience that such facts and thoughts were far more apt to escape from the memory than favorable ones. Owing to this habit, very few objections were raised against my views, which I had not at least noticed and attempted to answer.
ー Charles Darwin (p.69)

One particularly useful tool for avoiding confirmation bias is to ask counterfactual questions. Is this really true? What if? What is missing? Why do I feel such a strong attraction to this idea? Why am I not convinced? Be particularly wary of conventional wisdom as it is often groupthink dressed up as common practice that nobody bothers to question. I say question it and every other idea that you consume.

In a practical sense, there is a lot of junk out there masquerading as knowledge, and it can be quite difficult to separate the wheat from the chaff. Be selective about the content you consume, and even then, be further selective about the notes you take. Focus on things that you are genuinely interested in and that challenge your thinking. Avoid living within an echo chamber where your world-view is never challenged. Don't feel pressured to keep reading something that no longer holds your interest. There is too much for one human to consume in many lifetimes, so don't waste a single, precious second.

5: Keep It Simple, Not Perfect

A system of note-taking in its simplest form builds complexity of thought incrementally. Zettelkasten is based on small notes that you connect together. It is a simple system. Do not overcomplicate it.

No system is perfect. Just write notes, let them speak to you through the connections that naturally form while you work in your slip-box. Do not force organization. Do not beat yourself up over what you perceive to be imperfect notes. After all, the system is there to help you, not to put pressure on you or to constantly stand in judgement of you. Recognize that imperfection is what drives further research and insight. Let go and your notes will lead the way.

Find good tools to aid you, but beware: a tool alone will not improve productivity. It is the system within which daily routines are firmly rooted that a worthy tool finds purpose and value. A common mistake is bending the system to the tool instead of incorporating the tool into the system as a means of simplifying it. The slick, feature-rich interfaces of modern-day tools distract from what matters most: the system, the workflow and the means of success.

The jury is still out on the most effective tool for the slip-box method. One may never appear that fits your adapted slip-box system to a T. Favor tools that give you control of your data in standard formats; that way you can always switch as needs dictate.

Start writing notes today. Don't get tangled up in migrating existing notes, picking the perfect tool or looking for step by step guides. Just start with your next note. It is really that simple ー if you allow it.

You can find this diminutive but powerful book at the following sites: